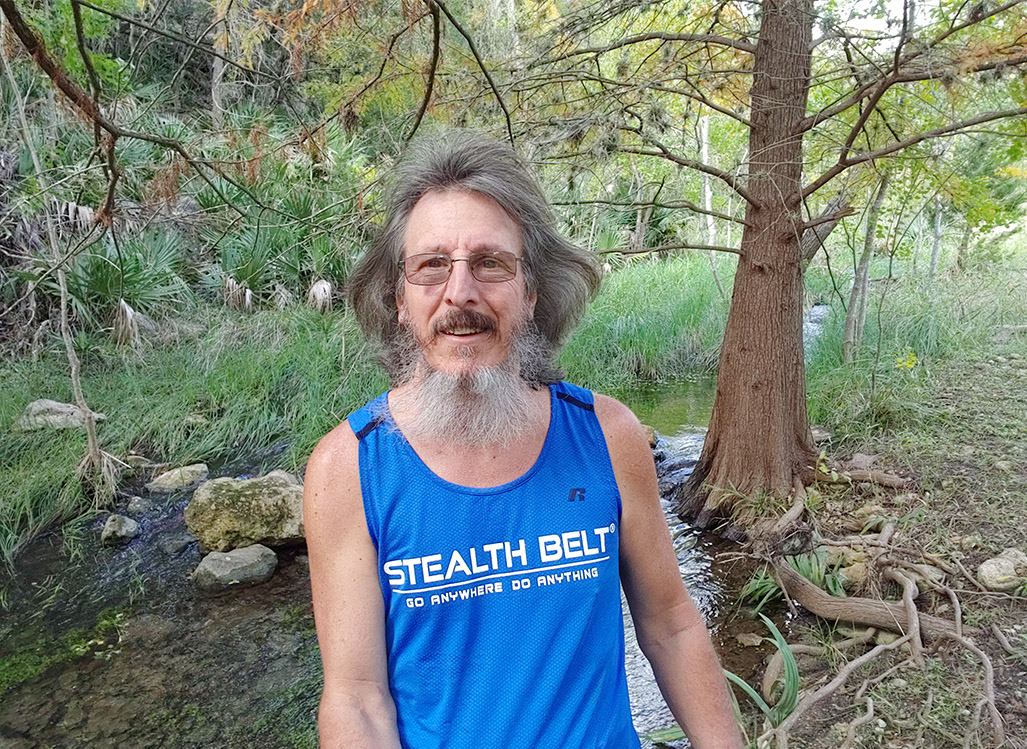 I retired from the Navy in 2003 after a 22-year career. In May 2012, at 51 years of age, I underwent my first, and only colonoscopy, at VA Medical Center, Hawaii. Leading up to my colonoscopy I considered myself to be in good health and had no signs of any medical problems. The results revealed 100 polyps and based on these findings I was referred to Tripler Army Medical Center, Hawaii, for genetic counseling. DNA testing revealed Adenomatous Polyposis Coli (APC), confirming the diagnosis of Attenuated Adenomatous Polyposis (AFAP).  (AFAP is known to be due to an autosomal dominant germline mutation. It as a later onset, between 50-55 years of age.) There is no cure and it is estimated to affect <0.03% of the global population.

As a result of this diagnosis I underwent a total-proctocolectomy w/ ileostomy surgery in July 2012.

What was your biggest fear?

I had no fear of the diagnosis, surgery and living w/ this condition. The way I see it in life we have two choices: one can React or Respond. I chose to respond by preparing myself for this journey once diagnosed w/ AFAP and undergoing ostomy surgery. As a result, I embraced my condition from the onset. My mindset was and continues to be not to think of things I’m unable to control, such as a medical diagnosis. What I can control is my positive ATTITUDE and after five decades on God’s green earth my positive ATTITUDE brought me this far. Along w/ my positive ATTITUDE I’m anchored by my strong FAITH which to me means having hope that everything will be alright. Shortly after my diagnosis I created this acronym: Full Assurance Influenced Through Hope (FAITH).

Was there something you were worried you would not be able to do after your ostomy surgery?

My other mindset is: worrying wasn’t the cause of my condition. Therefore, worrying will not make it go away.  During my military career I was equipped to Adapt, Improvise and Overcome and after I was diagnosed, I read many articles about the gene mutation, type of surgery and life as an ostomate. I was incredibly touched shortly after my surgery as I was reading about Rolf Benirschke’s diagnosis, surgery and life as an ostomate. His, Alive & Kicking, theme hit home with me on so many levels.

You see, in 1982 while on active duty in the Navy, I was stationed in San Diego. I can recall the excitement of Rolf’s successful second chance when he kicked a field goal in the game against the Miami Dolphins. The Chargers won when Rolf kicked a 29-yard field goal in overtime that put them into the AFC championship game. In August 1982, I attended a Chargers preseason game. Little did I know the impact those memorable moments would have in my life until now. As an ostomate I’m thankful to have a second chance as I go about my life sharing my journey.

Did those fears become a reality or were you surprised you could actually do what you were worried you couldn’t?

Based on my personal research I had no fears or need to worry. Therefore, fears did not become my reality. I had complete trust in my medical team that I could resume life as an ostomate w/minimal changes in my new lifestyle. My focus was on overcoming adversity since I considered myself to be very resilient.

I created an acronym for ADAPT: Attitude Determines the Ability for a Positive Transformation.

How has your ostomy changed you?

It has changed me on many levels which was the impetus that launched my advocacy efforts for my rare gene mutation, colon cancer and ostomy awareness. During my military career I had the honor of being an ambassador for the USA as I traveled the world on active duty. Now I’m honored to be an ambassador for the ostomy community, locally and abroad. I’ve had the opportunity to write an article for the Phoenix Magazine; Ostomy Canada Society Magazine as well as several ostomy, rare disease and colon cancer organizations. I’ve also been a “live case presentation” for several medical groups.

I’m in my element when talking about my rare gene mutation, being an ostomate and a colon cancer warrior. AFAP was discovered by Dr. Henry T. Lynch in 1992. He is the founding father of hereditary colon cancer research. After my surgery I had the honor to meet Dr. Lynch when he traveled to Hawaii. We stay in contact as my gene mutation requires annual surveillance of my stomach, small intestine, and eyes.

What helped you most during your recovery?

I continued to read about my condition and reached out to numerous ostomy related online resources. This allowed me the opportunity to better prepare myself for life with an ostomy and rare gene mutation. Sharing my journey was also important to me. My personal research efforts led me to contact United Ostomy Associations of America; Colon Cancer Alliance; National Organization for Rare Disorders; John Hopkins Hospital Hereditary Cancer Society, among other organizations for my advocacy efforts.

Did something help prepare you for your operation? If so, what was it?

My positive ATTITUDE, strong FAITH and ability to ADAPT to my life’s experiences has helped me in overcoming adversity. Also, my medical team at both the VA Medical Center and Tripler Army Medical Center were a wonderful source of support and encouragement.

Additionally, I often reflect on the phrase that’s been said we’re unable to control the wind. What we can do is adjust our sails. After 22 years in the Navy I’m good at adjusting.

What do you wish someone had told you before your ostomy operation?

Leading up to the surgery, my medical team provided many answers to my questions, such as physical and food limitations. This combined with my personal research efforts lead me to believe I was prepared for the surgery.

Was there a specific WOC Nurse or a doctor who helped you that you’d like to thank?

I’d like to send a special shout out to Dr. Fernando Ona, GI Clinic, Spark M. Matsunoga VA Medical Center, Hawaii; Chief of Surgery, Dr. Ian Freeman; Certified Genetic Counselor, Susan Donlan; CRC Surgeon, Dr. Ronald Gagliano and WOCN, Nina Lum of Tripler Army Medical Center, Hawaii. They all came alongside me during my diagnosis, leading up to and after this life saving surgery. They encouraged me to read about my condition and life as an ostomate. For that, I’m forever grateful.

Always Forge Ahead with a Purpose!

There are two quick, easy and FREE ways to join our GO family.

To receive encouragement, inspiration and practical information for ostomy patients and the people who love them.

Tell us your Story!

You can read some amazing stories from grateful ostomates and share your story.